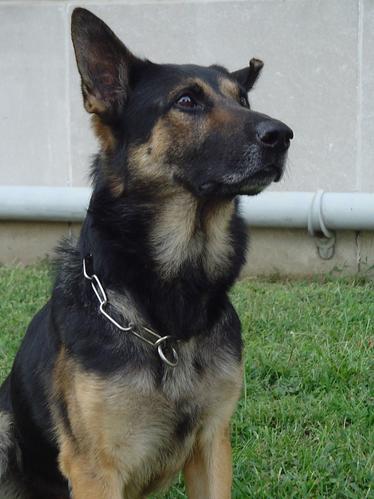 LOGAN — A beloved member of the Hocking County community has passed away. Known to many in the county simply by his first name, he served the community, fighting crime and educating school children. Condor wasn’t a superhero, yet he wasn’t just a dog — he was the first dual-purpose K-9 to work for the Hocking County Sheriff’s Office.

With Condor at 11-years-old, his partner made the difficult decision to have him put to sleep after medical issues degraded Condor’s quality of life.

Condor was HCSO Capt. Jerrod Alford’s partner from 2002 until Condor’s retirement in 2009. A German shepherd, Condor originally came from the Netherlands. The K-9 trained at Lynnwood Kennels with Alford, who said laughingly, “They gave me the meanest dog they had.”

Despite Condor’s sometimes grumpy temperament, Alford has fond memories of serving the community with him. “I loved it. It’s better than having a human partner,” he declared. “Condor never complained,” he joked.

Condor’s dual-purpose training meant he was conditioned to sniff out narcotics as well as to patrol and apprehend criminals. Despite his serious job, this K-9 didn’t always wear his game face; sometimes, he visited schools and civic groups to help HCSO maintain community relations and provide education on the role of a K-9 in law enforcement. “We gave at least 50 different demonstrations,” recalled Alford. “We gave civic presentations to schools, Kiwanis, the Eagles, the Moose, Boy Scouts…”

Alford feels that Condor actually belonged to the people of Hocking County. “We bought him with funds from the community. He was their K-9.”

During their seven-year partnership, the duo raked in more than $11,000 worth of narcotics in one traffic stop; and chased down suspects. “He convinced a guy to come out from under a shed once. Another time, we had chased someone for ‘umpteen’ miles in the cruiser from the state park to the spillway. The guy bailed out of his vehicle and went into the swamp. I sent Condor in to get him. The guy gave up.”

Following retirement, Condor continued to live with Alford. “He spent time hanging out as a family pet doing his civic duty protecting the family,” said Alford.