​Deputy K9 Dooley
November 30, 2006 - March 27, 2017
Retired K9 Dooley went across the rainbow bridge Monday, March 27th 2017 at 5:30 PM. He became acutely ill as a result of his existing cancer and was taken to the Mt. Zion Animal Clinic. Dooley died peacefully with Lt. Bowden, Tonya, and his dear friend Chris Gill at his side.

Dooley was born on November 30 of 2006. He was a wonderful dog and brought many good times and laughs to both his home family and his law enforcement family. As a Drug Detection K9 with the Vinton County Sheriff’s Office, he sent several people to jail, found evidence in crime investigations, and assisted in finding multiple missing persons around the state. Dooley worked so hard and was so focused while searching; he was a force of nature when he had the scent. Dooley entered service in September 2007 at the age of 10 months old. He was certified as a Narcotic Detection Dog and a Scent Specific tracking dog. Dooley was acquired from Roger Bice of Lima Ohio.

Forever will be missed are his big, beautiful eyes and happy disposition. Missed will be his excitement as he watched Lt. Bowden get his uniform on, knowing all the while that he would get to go to work soon. Dooley would prance around in front of the other dogs, as if to say “Yeah, I have a job and get to go to work”. He was also loved by the children in our elementary schools, 4-H clubs, and other organizations where he did several demonstrations. He was also very active in community service work and met many citizens in the county at his various demonstrations.

Dooley will be missed by those that knew him personally and it is a comfort to know that he touched so many lives in such a positive manner. Good bye sweet pup. Go and play ball forever in the yard, and shred every box you see.

From The Cardaras Funeral Home Obituary 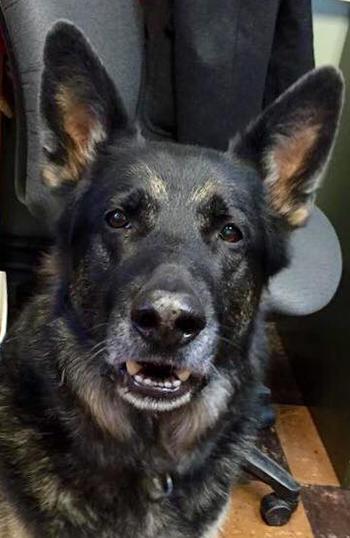