Loyal partner, best friend, you will be truly missed.

LOGAN – K-9 handler Captain Jerrod Alford returned to work on Friday after the devastating loss of his partner, “J.”

The seven-year-old German Shepherd had been struggling with health issues for the last year. On Monday the duo visited OSU for an exploratory procedure, but only Alford came home.

“We knew he had some bowel issues, but we just couldn’t hammer down what his deal was,” said Alford, who established the sheriff offices K-9 unit in 2002 and has been working there ever since.

“We did some testing, and it came back inconclusive, a lot of it came back as if he had an infection, so we treated him with antibiotics,” Alford continued. “His white blood cell count, usually in dogs it ranges 6,000-17,000, at one point his was 66,000, which is usually a sign of cancer or an extremely bad infection.”

Alford and the vets worked with J, and by Monday his white cell count was down to 45,000.

“We originally took him up there [to Ohio State University Veterinary Medical Center] to get a scope, basically they were going to go through his intestinal tract to figure out where the problem was. But I came home Sunday and he had thrown up in his kennel, which was odd,” said Alford. “So I took him outside, cleaned up his kennel, cleaned him up, and he acted like he was not feeling well, so I took him back in the house and watched him all day.

“I got up the next morning to come to work, he’d thrown up in his kennel, so I called the Sheriff, ended up calling the vets and took him to OSU, and that’s when they said he had a perforated bowl,” explained Alford, taking a moment to collect himself.

“What that means is his bowel had a laceration, basically,” Alford continued, struggling through the pain of his loss. “And fluid and gas was leaking into his abdomen, requiring emergency surgery, which was four to six thousand dollars. So, being that price, with his age, we decided to euthanize him.”

The appointment that Alford had hoped would help J ended up being his last. After, Alford brought J home and informed his family, who were also crushed by the loss. J had not just been a police dog, he had been a part of their family, and Alford, his wife, and their four children felt J’s absence deeply.

“He was family,” said Alford. “I’d rather have seen him go in his sleep, but Monday, he was suffering. Cardaras Funeral Home picked him up the day before yesterday to take him and get him cremated, and hopefully I’ll get him back next week.”

J will have a place of honor next to his late comrade Condor, Alford’s former police dog who passed in 2011.

J served with the Hocking County Sheriff’s Office for five years, going through six weeks of training with Alford to get certified, though he spent eight weeks prior to that being trained in narcotics and bite work with a trainer. He was re-certified several times during his service, both for bite work and narcotics.

“Bite work is criminal apprehension, basically when he goes up and bites. Say if a felon is fleeing from me, if he runs and I have the justification to send my dog to bite him and apprehend him, the dog will bite him and hold the position until I get there and tell him to release, and we can handcuff the suspect,” explained Alford.

When selecting dogs to go through police training, officers look for dogs with a very high drive to work. They do not need a big, aggressive dog, they need a partner who wants to do their best to follow commands, enjoys being on the job and follows commands.

“They’re like, ‘Dad, what do you want me to do now?’ and they’re happy to do it, they do what they want to do to please you and make you happy. And their reward is to play, that’s all they want to do. Even when they bite someone, they’re not being mean, they just want to play. They think it’s fun because I’m happy that he’s biting the person, [following orders], so his tail is wagging and he’s happy,” said Alford.

“J was social. J was one of those ‘love me love me love me’ types,” continued Alford. “He’d lean against you, he’d lick the heck out of you, I mean, licked everything. Really good dog, probably the dog you’d want to have. He got along with everybody,” praised Alford.

Though the canine unit does still have two dogs to work narcotics, without J there is no one trained in bite work who can act as back up to the officers, and Alford feels that absence more than anyone.

“It’s more in the car that I miss him, because it’s empty. That’s the tough one,” said Alford sadly. “It’s hard to figure out if I’m going to pass the torch or keep it, I like doing it, I love doing it, but…” Alford had to stop, overcome for a moment with grief for his lost partner.

At this time, Alford is unsure if he will remain a handler if a new dog arrives, though he does hope that a new dog will be brought into the department despite the significant cost of the dog and training.

“We’ll see what the future holds for us, you never know,” said Alford. “We’ll take it day by day.” 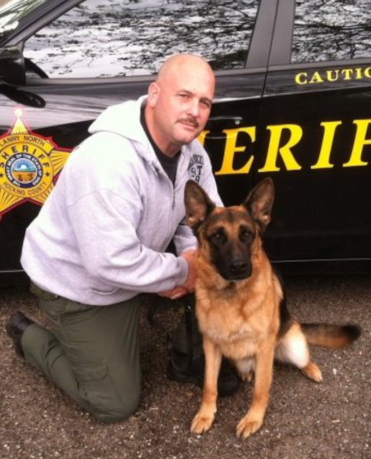