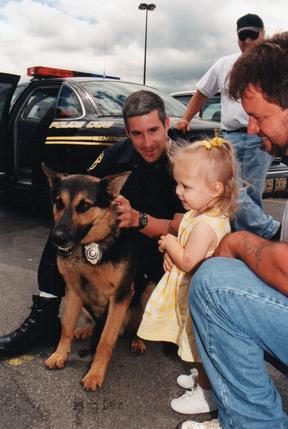 Read more on K9 Rookie at the Boardman News My Canine Partner: Rookie and his K9 Memorial Card

Born Dec. 26, 1997; Died Dec. 27, 2002. Rookie was a male German Shepherd born in Romania. He was a Dual Purpose Patrol Dog trained in Apprehension, Tracking,
Area Search, Drug Detection and Handler Protection. Rookie’s commands were in German. Rookie was out of the car for a bathroom break at a local school at 10:30 at night. Our black cruiser was parked on new snow under a functioning overhead light, headlights on. A teenage driver that failed to scrape the ice off his windshield failed to see the cruiser and nearly struck me as I tried to stop the car. The car did strike and kill Rookie.

To make matters worse, just five days earlier I had to put my pet female German Shepherd to sleep due to an inoperable tumor in her head.

Fate can be so cruel; as I put the finishing touches on this work, I have suffered loss again. Using everything I learned with Rookie, I trained Maximus for Search and Rescue and also certified him in Therapy. We gave numerous public demonstrations and were regular visitors at nursing homes and adult handicap workshops. Age is no one’s friend and arthritis ate away at Max’s hips. He had to be put to sleep as my heart is broken yet again. 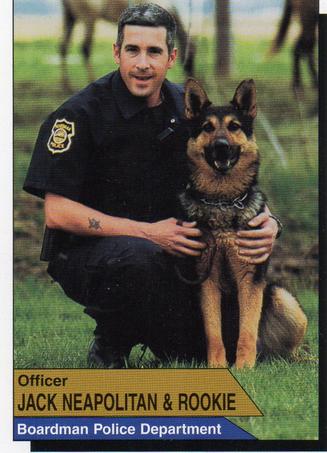 The Sergeant in charge of the K-9 unit met a woman who had a teenage son with Down syndrome. Phillip loved the Police and wanted to be a Police Officer one day. His mom asked that if any officers could stop by the house and meet Phillip, he would be thrilled. One day when it was slow and I was in the area, I wheeled into the driveway, knocked on the door and introduced myself to Phillip and his mom. Now, Phillip is short but he is built like a tank. He is a super sweet guy. He was very excited when he found out that he was about to meet a Police Dog. I gave him careful instructions on what to do, and then went to get Rookie out of the car. The “careful instructions” went right out the window…what happened next almost stopped my heart. Phillip strode confidently over to Rookie, leaned down and fully wrapped Rookie in a bear-hug, his face near Rookie’s. Even I didn’t hug Rookie like that. In a split second I pictured my career as a handler come crashing down as this went badly…’Special-Needs Teen Mauled By Police Dog.’ Think! What can I do? Praise, praise, praise! In a calm, even tone of voice I cooed, “Gooooood boy, Rooooook. Goooood boy.” Are you kidding me? Rookie never even flinched. He just stood there with his German Shepherd smile, making a new friend. He knew Phillip was special. He just KNEW.

I told you I would not be ashamed of my tears, and as I was writing this they came. Even nearly 14 years after he was taken from me, it still hurts. It hurts terribly. I thought we still had a lot of good work to do, but it was not to be. By saying his name and telling his story, maybe I can give Rookie that immortality he so deserves." 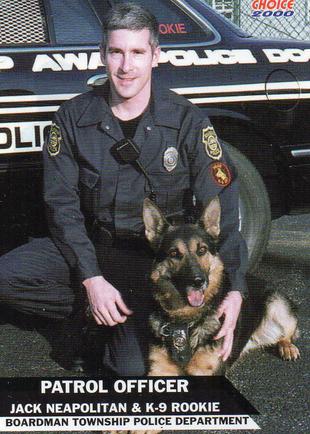 Forces mourn fallen K-9 officer  By CHRISTOPHER BOBBY Tribune Chronicle
BOARDMAN - The silence of a bright chilly morning was broken as more than 50 cruisers pulled up in front of township police headquarters, tires squeaking in the snow. Police K-9 officers were barking through the slight cracks left in the cruiser windows. The dogs were honoring one of their own - Rookie - a fallen German shepherd who was afforded all the rights of a human officer. "Perhaps Rookie captured more hearts than bad guys," were words penned by the canine's handler, Boardman patrolman Jack Neapolitan, referring to the many demonstrations the duo put on for students. Rookie was struck and killed by a vehicle December 27 in the driveway of Glenwood Middle School. Neapolitan, who was given a few days leave after the death, stood in front of the crowd where grown men were weeping and where a young boy proclaimed, "Rookie will remain ever loyal." The boy, Billy Martin Jr., is a Niles sixth grader and founder of the Bite the Bullet program, which provides protective vests to police K-9s. He acknowledged that
"a vest can't protect a police dog from everything."
No charges were filed against the motorist. Police said the vehicle driven by a 17 year old boy from Boardman was traveling about 20 MPH when it hit the dog. The driver's visibility may have been hampered by ice on the windshield. Neapolitan and his K-9 had stopped at the school for an exercise break about 10:35 p.m.  The dog was born five years ago in Romania and then put through his paces during countless hours of training, with Neapolitan right by his side. The team was certified in April 1999, and worked in the patrol division, as well as sniffing out drugs in a special Drug Enforcement Agency detail. But Rookie was also a tracker.  "You might think this is too much for a K-9, but we will miss his enhanced senses," said Boardman police Chief Jeffrey Patterson. "think the funeral today helped Jack with a little closure. "Officers traveled from as far as Port Clinton to take part in a procession from Boardman Park to the police station. The uniformed men circled the seating area of the township meeting room and saluted during the ceremony. Trustee Thomas Costello also said his good-byes, while Warren police officers Chris "Skippy" O'Rourke, and former K-9 officer Michael Krafcik both spoke about their love of the animals. "When I worked the blue division, nobody talked to me. Nobody cared," said O'Rourke. "Now with Aron, Everybody stops me, asking about the dog."  It was Trumbull County Sheriff's Lt. Dan D'Annunzio, who has lost two K-9s, whose voice cracked a bit while he read a poem:

"I believe that when people say the names of their heroes and tell their stories, that those heroes achieve immortality. I’d like to tell you about my hero, my K-9 partner Rookie. I’ve heard that once in a lifetime a dog may come into your life and change everything. Rookie was that dog. Never tipping the scales at over 70 pounds, Rookie made up for it in speed and aggression. He was an outstanding tracker and had some great apprehensions after following a suspect’s scent. Great dope dog, too. But I have told people that Rookie captured more hearts than bad guys. I felt that Rookie was the community’s dog, too, and I shared him every chance I got. We did lots of public demonstrations where I found public speaking to now be easy; after all, I got to brag about my partner. If a child waved at my cruiser as I rolled through a parking lot, you can bet that in no time flat that child had a Rookie trading card in one hand and was petting Rookie with the other. But I’d like to tell you my favorite story that demonstrates how special Rookie was. Let me start by saying that I will not be ashamed of any tears that come in remembering him. The deeper the love, the deeper the loss; and oh, man did I love him. 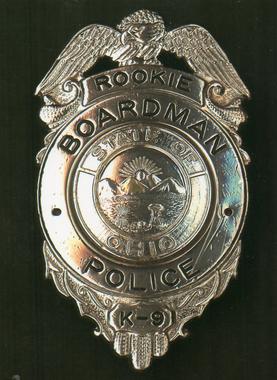